“This video puts a spotlight on the life of Revolutionary Era painter Charles Willson Peale,” says Smith, who founded the Foundation in 2013 and GratefulAmericanKids.com in July. “Fourth graders from the Richmond, VA, school Sabot at Stony Point acted out the script written by our team, and Richmond-based re-enactor Chris Dunn took the lead as Peale. The video was shot at the Virginia Museum of Fine Arts, which has several paintings by Peale and his son, Rembrandt, and Peale’s teacher, Benjamin West. Our editors had fun making the video come to life.”

Be sure to check out the new video at GratefulAmericanTV.com, then scroll down to take our History Challenge!

Look for hints in the video that give clues to the answers!

A) Vermont Military and Farming Association

B) Vegetarian Moms for Agriculture

The answer is C) the Virginia Museum of Fine Arts. Located in Richmond, VA, its purpose is to collect, preserve, exhibit, and interpret art, to encourage the study of the arts, and thus to enrich the lives of all. Learn more at vmfa.museum.

2. How many children did Charles Willson Peale have?

The answer is B) 17. Peale was married three times; he and his first wife, Rachel Brewer Peale (1744-90), had 11 children; seven of them survived childhood, although one son died at the age of 18. After Rachel’s death Peale married Elizabeth De Peyster (1765-1804), with whom he had another seven children, five of whom lived to become adults. Peale’s third wife, Hannah More (1755-1821), helped him raise his youngest offspring.

The answer is A) Benjamin West, who was one of the most famous painters of the time in London. Born Oct. 10, 1738 (he died on March 11, 1820) was best known for his historical scenes; he was the second president of the Royal Academy in London, serving from 1792 to 1805 and 1806 to 1820. He was offered a knighthood by the British Crown, but declined it, believing that he should instead be made a peer. West believed: “Art is the representation of human beauty, ideally perfect in design, graceful and noble in attitude.” Learn more about West here.

4. Which academy did artists Anna Claypoole and Sarah Miriam get accepted to?

A) Hogwarts School of Wizardry and Witchcraft

The answer is D) the Pennsylvania Academy of Fine Arts. Founded in 1805, it is the first and oldest art museum and art school in the United States. Today, it is  known internationally  for its collections of 19th- and 20th-century American paintings, sculptures, and works on paper. Its archives house important materials for the study of American art history, museums, and art training. Learn more at academyart.edu. 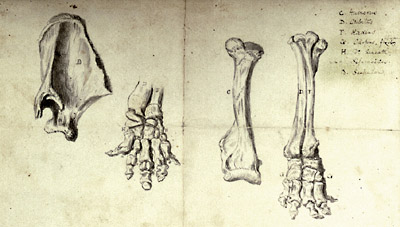 5. Charles Willson Peale helped discover and put together the remnant of which ancient animal?

The answer is B) a Mastodon Elephant. Click here to learn more about this Fascinating Fact!

Thank you so much for taking the quiz about Revolutionary War Era painter Charles Willson Peale. Stay tuned for our next video. Who will it be about? Send us your requests at GratefulAmericanFoundation.com and GratefulAmericanKids.com.

Here’s to getting excited about studying American history!